If you’re plugging away at a game and want the world to know about it GIFs are your answer. I’m going to share with you today a couple of tips to get the most bang for your buck in terms of the final output and the workflow for creating the GIFs in the first place.

GifCam – I can’t rate this highly enough, it’s such an awesome tool for creating gifs. Not only does it compress the crap out of them so you can sneak in under Twitter’s 3 meg limit but it also gives you editing capabilities from within the tool itself. If you aren’t using this GRAB IT NOW! Ok…got it? Awesome.

I try to record my GIFs at 640×360 at 33fps, you can tweak the size and fps that you record from within the tool. Remember that you’re shooting for the magical 3 meg limit. If you’re not going to put this on twitter you don’t need to worry so much about the limit but be cognisant of the file size, you don’t want to be embedding 50meg GIFs in your site, that’s no fun for anyone.

The recording and editing process is fairly straight forward, setup your variables, line it up, hit record and then edit the required footage and save.

This is all well and good but capturing those ultra-rare kick ass moments in your game can be tricky as you need to continually stop, clear and restart the GIF recording so it doesn’t chew up all your memory.

What I’ve found incredibly helpful is to capture your gameplay footage using screen recording software such as Camtasia, ShadowPlay or Fraps these seem a lot more efficient are capturing a longer period of gameplay which increases the chances getting in that double jump to wall slide to triple flip ninja kick. Once you have this footage you can just overlay Gifcam to the footage, record, edit the GIF and you’ve just got an awesome GIF on your hands. In Gifcam you can set the frame delay to be all the same by shift clicking on the time delay in the edit window. This smooths it out a bit. 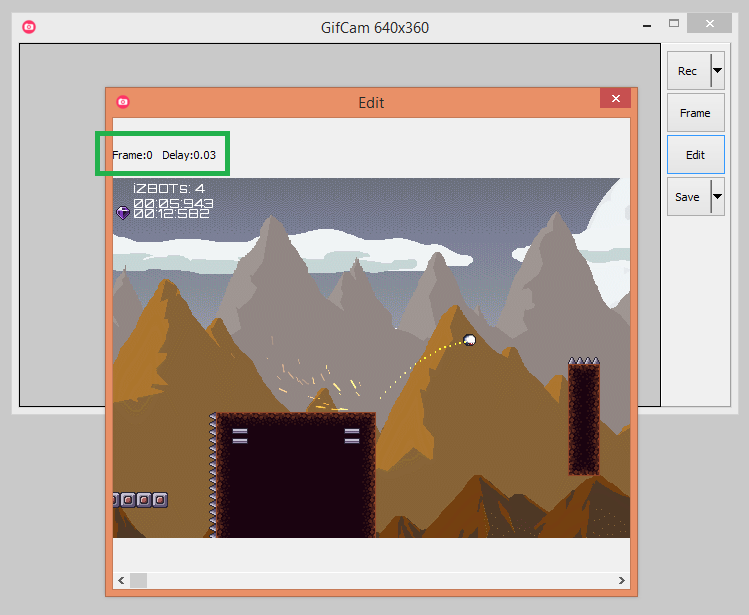 I generally capture and bunch of footage and then find the best bits and create a heap of GIFs at one time. Enough for a few weeks worth of #screenshotsaturday posts.

Once you have the GIF and you’re hosting it yourself or it’s slightly over twitters limit I recommend using:

This can bring down the size of an already compressed GIF to give you the quickest load speed or squeak it in under Twitter’s limit.

Get iZBOT now on Steam!